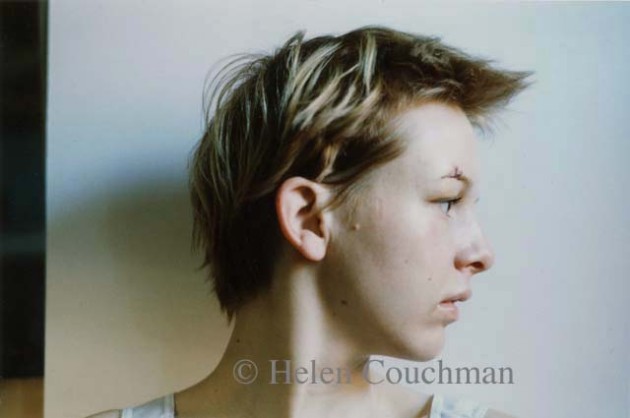 Convalescence is remembered only as a masked experience when thinking was unclear, a time when the body, was preoccupied with healing. This may be likened to being under water for a long breath when the body and mind became preoccupied with the next breath. The two-and-half week recovery period become a gap in thought. This recuperation is only tentatively referred to again as usual daily patterns return and the risk of pain and the fear of death came back in sudden unexpected bursts of emotion.

These photographs taken from a series of sixty-one photographs were produced over a period of two and a half weeks following an accident. The images act as an unspoken reconfirmation of identity and the woman who is blurred in the earlier images has expressions that are at times unfocused and distant.

The injured subject, emotionally and physically weak, was recorded on a daily basis, showing that the facial injury worsened prior to healing. The photographs are an attempt to offer some insight into the states of mind of the injured person. Only small changes can be seen each day in the healing face and the time frame is slow in contrast to the suddenness of the injury.