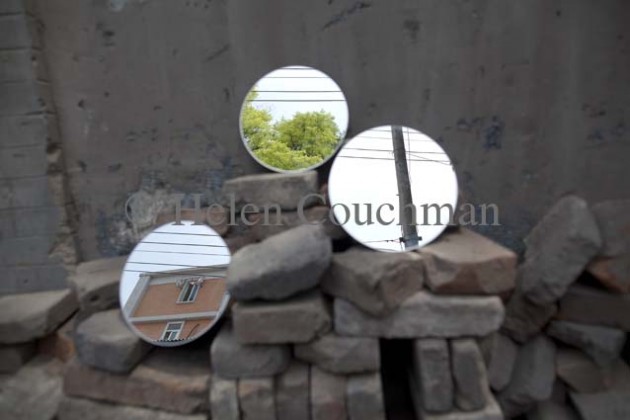 ‘In many parts of China mirrors are placed outside the house to frighten away evil spirits… Mass production of mirrors in the early 20th C. reinforced cosmological conceptions, and mirrors were placed in many different settings to help improve the flow of energy and money, and keep a confined space from becoming dead and stagnant.’
‘Exotic Commodities,‘ Frank Dikotter, pub. 2007

Couchman has been making work about changing landscapes in various places for many years. Since working in Beijing, her practice has often focused upon exploring scale in her images and the mix of old and new she sees around her. She has used printmaking, drawing, photography and installation to communicate these ideas.

Beijing is a huge city in flux, a city that is constantly changing at a rapid pace. Couchman is curious to know what these changes mean to its inhabitants but also to ‘touch’ what it looks like. Recently, she has been working around the perimeter of a new development, in the hutong lanes near Gulou, the city’s historic Drum and Bell Tower Square, on the edges of what has now been permanently removed. This new photographic series seeks the texture and the vistas of the hutongs that have undergone this process of destruction. As Couchman says, the project aims, “to explore what I can see of the land – literally the earth and fabric of the city. It has a performative angle: process, construction, dirt, proximity and distance are all evident in these images. This is what I am working with.”

Couchman has headed out into the streets armed with a camera and three mirrors. The mirrors are used to fuse the different elements of the photographed scenes, both material and immaterial. The result is not the illusion of a cityscape but rather an intimate yet distant exploration of the fabric, and texture of a city whose detail as well as vistas are in flux.