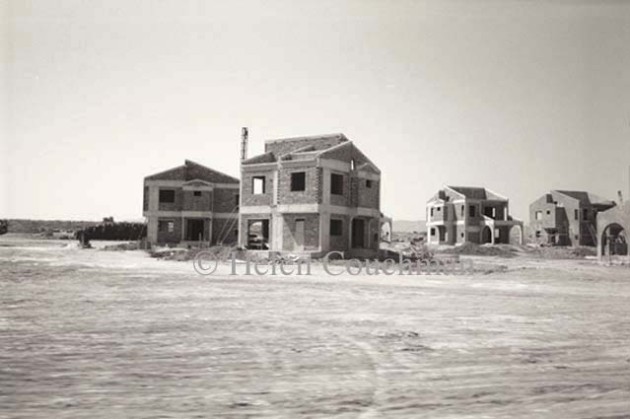 “…because as soon as everyone else finds out how beautiful it is, it will be too late.”
The Sunday Times, 2 May, 2004

In classical painting there was a concept of the ideal landscape, one which had been constructed from values, agreed upon and recognised by artists and theoreticians.

Have we lost confidence in the evolved order in the landscape so much that it must be removed completely before we can proceed? Evidently there is need for change (and the hope of change) but too much is swept aside in this transformation. The unfinished sprawl and the haste with which the building-sites grow gives rise to mistrust and a loss of local identity.

When I visited ripe carob beans had fallen from the branches unpicked and lay discarded and rotting under the trees. I was told the owner-farmer was waiting to sell the field to developers and that the ancient trees would be destroyed like those that had grown in the next valley.

These building sites seem to be built by unscrupulous developers. I am interested in formal beauty in photography but have tried to push this impulse aside to more clearly explore the landscape. It is a common belief that as the landscape is drawn, painted and photographed it is better understood. Formalism in contemporary landscape photography can seem so disinterested. Please do not avert your eyes in an agony of good taste.

These photographs were taken a few weeks after it became, for the first time in recent years, possible to cross the ‘green line’ and gain access to both the north and the south of Cyprus. Since 1963 there has been sporadic inter-communal violence on the island until in 1974 Cyprus was declared to be divided between the south Greek Cypriot community and the northern Turkish Cypriot community. The entire island entered the EU on 1 May 2004. However, EU laws do not apply to north Cyprus.