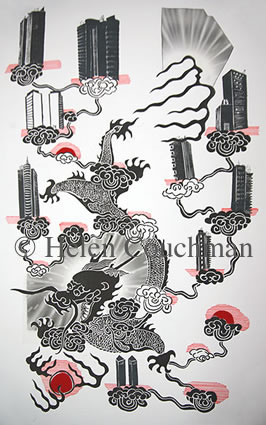 Helen Couchman has produced a body of new work for this exhibition drawing upon her experiences of living in Beijing.

Observing the glories of a new city that is designed to welcome the world to the Olympic games next year, she is exploring the structure and scale of her imagery, mixing the traditional cultural icon of the dragon with the new icons of the city, vast buildings and huge eight-lane ring roads. Traditional iconography merges with impressive, shining, mirrored modern structures to create a fantasy landscape.

Couchman has learnt a traditional Chinese woodcut printing technique to make this work, mixing this traditional form of production into her current practice.

Couchman’s interest returns again and again to landscapes where the view is fast changing. She takes her project Gift from last year as a starting point. As a visitor observing the city, she finds the concept of gift-giving to be a fertile one.

‘A considerable part of our morality and our lives themselves are still permeated with this same atmosphere of the gift, where obligation and liberty intermingle.
…themes of the gift, of the freedom and the obligation inherent in the gift, of the generosity and self-interest that are linked in giving… a dominant motif too long forgotten.’
Marcel Mauss, The Gift, 1954. (First published, Essai sur le don in Sociologie et Anthropologie, Presses Universitaires de France, 1950.)

The sentimental impetus of the development across Beijing is to build a city that the Chinese will be proud of. As China develops at a fast pace, there are surreal side effects resulting from the rapid changes.

Recently working in blacks and greys, Couchman has introduced red, the colour of luck in China, into her palette. Red, as the colour also of blood is employed to represent the body of the city, forming networks and highlighting the distances between districts old and new. Routes through this vast city are structured around a framework of six ringroads, with the historic Forbidden City at its centre,

This is Helen Couchman’s second exhibition in Beijing, following her exhibition Gift last May at 3rd Floor Contemporary which was part of the 2006 Dashanzi International Art Fair.