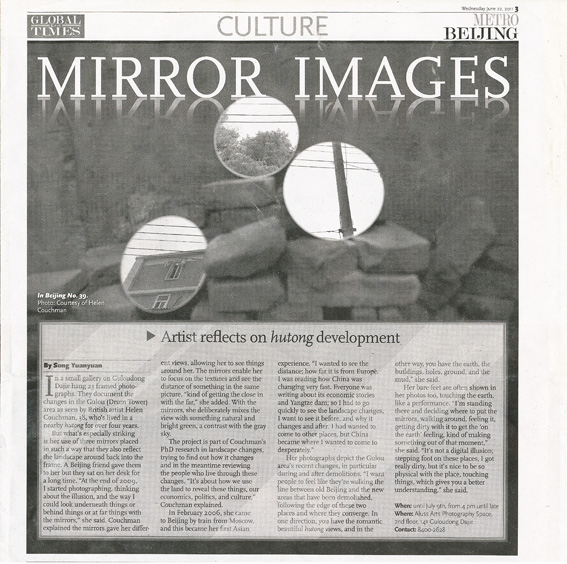 In a small gallery on Guloudong Dajie hang 23 framed photographs. They document the changes in the Gulou (Drum Tower) area as seen by British artist Helen Couchman, 38, who’s lived in a nearby hutong for over four years.

But what’s especially striking is her use of three mirrors placed in such a way that they also reflect the landscape around back into the frame. A Beijing friend gave them to her but they sat on her desk for a long time. “At the end of 2009, I started photographing, thinking about the illusion, and the way I could look underneath things or behind things or at far things with the mirrors,” she said. Couchman explained the mirrors gave her different views, allowing her to see things around her. The mirrors enable her to focus on the textures and see the distance of something in the same picture, “kind of getting the close in with the far,” she added. With the mirrors, she deliberately mixes the view with something natural and bright green, a contrast with the gray sky.

The project is part of Couchman’s PhD research in landscape changes, trying to find out how it changes and in the meantime reviewing the people who live through these changes. “It’s about how we use the land to reveal these things, our economics, politics, and culture,” Couchman explained.

In February 2006, she came to Beijing by train from Moscow, and this became her first Asian experience. “I wanted to see the distance; how far it is from Europe. I was reading how China was changing very fast. Everyone was writing about its economic stories and Yangtze dam; so I had to go quickly to see the landscape changes, I want to see it before, and why it changes and after. I had wanted to come to other places, but China became where I wanted to come to desperately.”

Her photographs depict the Gulou area’s recent changes, in particular during and after demolitions. “I want people to feel like they’re walking the line between old Beijing and the new areas that have been demolished, following the edge of these two places and where they converge. In one direction, you have the romantic beautiful hutong views, and in the other way, you have the earth, the buildings, holes, ground, and the mud,” she said.

Her bare feet are often shown in her photos too, touching the earth, like a performance. “I’m standing there and deciding where to put the mirrors, walking around, feeling it, getting dirty with it to get the ‘on the earth’ feeling, kind of making something out of that moment,” she said. “It’s not a digital illusion; stepping foot on these places, I got really dirty, but it’s nice to be so physical with the place, touching things, which gives you a better understanding,” she said.