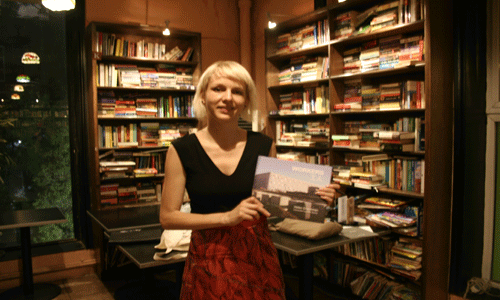 Helen Couchman and her book Workers

In December 2007, during her second extended visit to Beijing, Helen Couchman photographed a large group of migrant workers building venues for the Olympic Games. She published the photos in a book entitled “Workers.”

“I think it’s a historical moment for this country, so the people participating make the thing happen. People who are central to the happening should have a record and be sort of proud of what they’ve done.”

“Workers” is Couchman’s first published book. As her subjects, the English photographer chose the migrant laborers who built the National Stadium, or Bird’s Nest, and the Water Cube, the two grandest venues of the upcoming Beijing Olympics.

There are 143 portraits in her book. She asked each worker to stand in roughly the same spot with the Olympic stadium and swimming venue clearly in view behind them. Each worker looks calmly, confidently and directly into Helen’s lens.

An important feature of these photographs is that, irrespective of their archival value, they were taken without the approval of local authorities. Helen simply asked the workers themselves if they would let her photograph them. She did not introduce herself, nor did she know whether her Chinese was good enough to communicate with them. To her surprise, the workers’ responses were very positive.

Couchman talks about what impressed her the most when she took the photos.

“I was really taken by their enthusiasm. I really enjoyed the positivity. Something interesting for me was I knew that handwriting is important in China, but I didn’t realize in a way how important. People took great pride in writing their addresses and names beautifully. And they felt their handwriting wasn’t good enough. They had conversations with friends who they thought could write them well and asked them to write for them.” 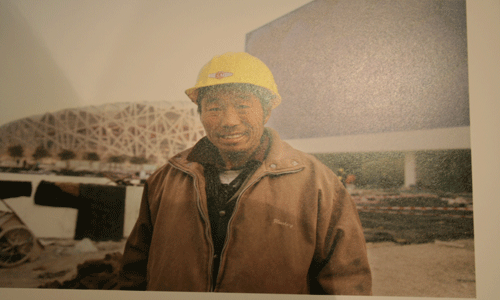 A worker helping to build the Bird’s Nest

Besides each portrait what also in the book are the workers’ signatures and the provinces where they are from. Some are from Sichuan Province, and some are from Henan Province.

Helen gave each worker a copy of their photo for them to keep or send home to their families.

John Pauline from Australia is one of the lead architects on the Water Cube. He has been working on the project for more than three years.

Pauline has seen many publications about the Olympic venues in Beijing. He says Couchman’s book is quite special.

“What impresses me most is unlike other books of the Olympics or stories about Olympics, it’s not about the athletes. It’s not the buildings, and it’s not about Beijing. It’s about people. That’s wonderful to take the shift of attention from the worldwide audience and just focus on the physical hand of the workers who have built these wonderful buildings, who are going to be largely responsible for making the Beijing Olympics a success.”

Wang Kan is a doctor of Laws at the Renmin University of China. Wang has been helping migrant workers on a program arranged by his university. He believes that they deserve respect.

Wang says Couchman’s book gives them that respect. He talks about one photo that especially caught his attention.

“There is a photo about a female worker. She smiles on the photo and she looks very proud of herself. I think for me I like this photo because it shows a construction side. We believe construction is only for men. But you see women there. They enjoy the same happiness as the male workers. That shows more like equal culture between Chinese men and Chinese women.”

As the Olympics is drawing near, Helen wishes that this book will be a great gift for this grand event. 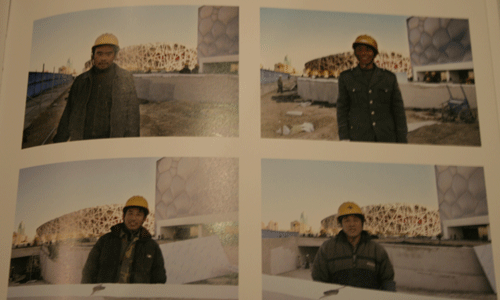 The four workers are on the same page of this page, each of whom with a smile on their faces 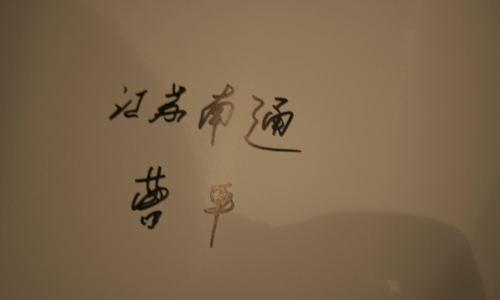 A signature of one worker and his hometown