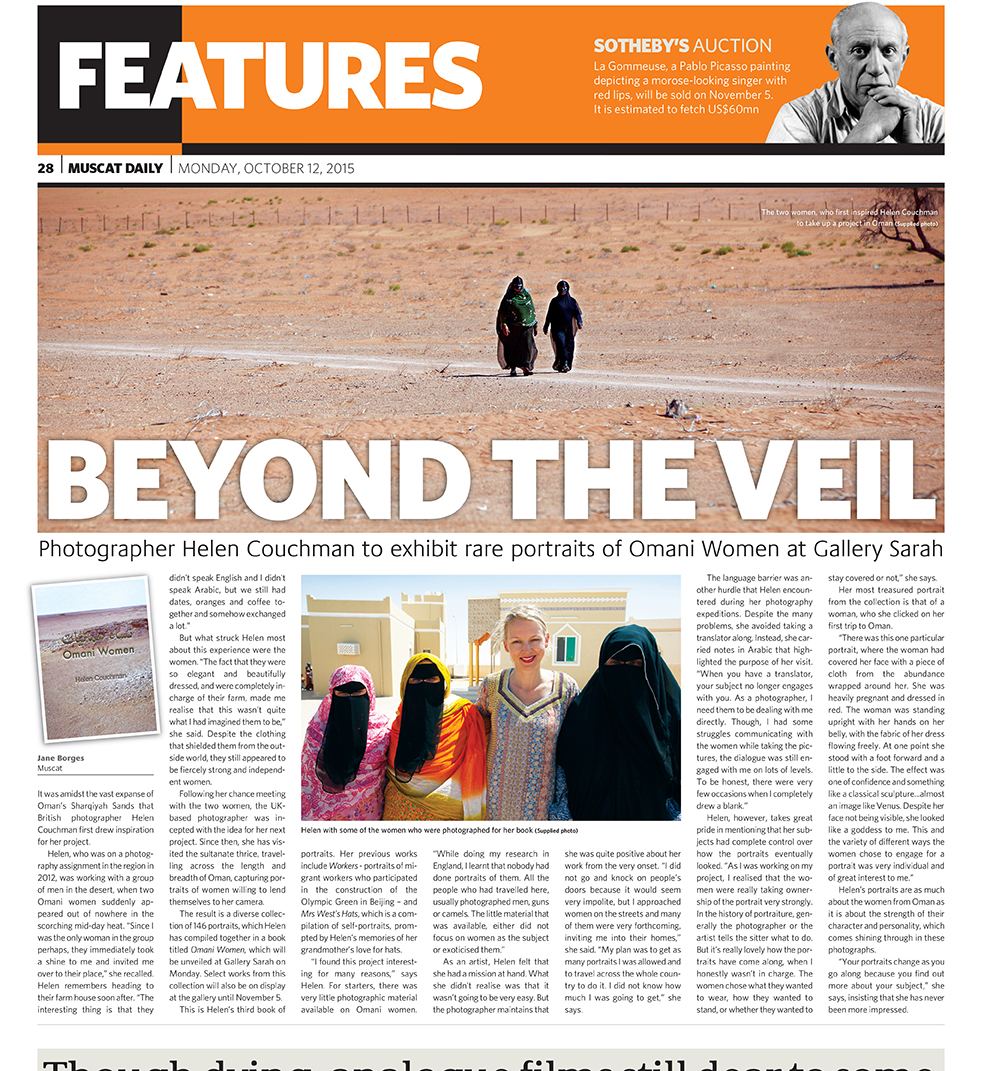 The two women, who first inspired Helen Couchman to take up a project in Oman
By Jane Borges

It was amidst the vast expanse of Oman’s Sharqiyah Sands that British photographer Helen Couchman first drew inspiration for her project.

Helen, who was on a photography assignment in the region in 2012, was working with a group of men in the desert, when two Omani women suddenly appeared out of nowhere in the scorching mid-day heat. “Since I was the only woman in the group perhaps, they immediately took a shine to me and invited me over to their place,” she recalled. Helen remembers heading to their farm house soon after.

“The interesting thing is that they didn’t speak English and I didn’t speak Arabic, but we still had dates, oranges and coffee together and somehow exchanged a lot.”

But what struck Helen most about this experience were the women. “The fact that they were so elegant and beautifully dressed, and were completely in-charge of their farm, made me realise that this wasn’t quite what I had imagined them to be,” she said. Despite the clothing that shielded them from the outside world, they still appeared to be fiercely strong and independent women.

Following her chance meeting with the two women, the UK-based photographer was incepted with the idea for her next project. Since then, she has visited the sultanate thrice, travelling across the length and breadth of Oman, capturing portraits of women willing to lend themselves to her camera.

The result is a diverse collection of 146 portraits, which Helen has compiled together in a book titled Omani Women, which will be unveiled at Gallery Sarah on Monday. Select works from this collection will also be on display at the gallery until November 5.

This is Helen’s third book of portraits. Her previous works

include Workers – portraits of migrant workers who participated in the construction of the Olympic Green in Beijing – and Mrs West’s Hats, which is a compilation of self-portraits, prom-pted by Helen’s memories of her grandmother’s love for hats.

“I found this project interesting for many reasons,” says Helen. For starters, there was very little photographic material available on Omani women. “While doing my research in England, I learnt that nobody had done portraits of them. All the people who had travelled here, usually photographed men, guns or camels. The little material that was available, either did not focus on women as the subject or exoticised them.”

As an artist, Helen felt that she had a mission at hand. What she didn’t realise was that it

wasn’t going to be very easy. But the photographer maintains that she was quite positive about her work from the very onset. “I did not go and knock on people’s doors because it would seem very impolite, but I approached women on the streets and many of them were very forthcoming, inviting me into their homes,” she said. “My plan was to get as many portraits I was allowed and to travel across the whole country to do it. I did not know how much I was going to get,” she says.

The language barrier was another hurdle that Helen encountered during her photography expeditions. Despite the many problems, she avoided taking a translator along. Instead, she carried notes in Arabic that highlighted the purpose of her visit. “When you have a translator, your subject no longer engages with you. As a photographer, I need them to be dealing with me directly. Though, I had some struggles communicating with the women while taking the pictures, the dialogue was still engaged with me on lots of levels. To be honest, there were very few occasions when I completely drew a blank.”

Helen, however, takes great pride in mentioning that her subjects had complete control over how the portraits eventually looked. “As I was working on my project, I realised that the wo-men were really taking ownership of the portrait very strongly. In the history of portraiture, generally the photographer or the artist tells the sitter what to do. But it’s really lovely how the portraits have come along, when I honestly wasn’t in charge. The women chose what they wanted to wear, how they wanted to stand, or whether they wanted to stay covered or not,” she says.

Her most treasured portrait from the collection is that of a woman, who she clicked on her first trip to Oman.

“There was this one particular portrait, where the woman had covered her face with a piece of cloth from the abundance wrapped around her. She was heavily pregnant and dressed in red. The woman was standing upright with her hands on her belly, with the fabric of her dress flowing freely. At one point she stood with a foot forward and a little to the side. The effect was one of confidence and something like a classical sculpture…almost an image like Venus. Despite her face not being visible, she looked like a goddess to me. This and the variety of different ways the women chose to engage for a portrait was very individual and of great interest to me.”

Helen’s portraits are as much about the women from Oman as it is about the strength of their character and personality, which comes shining through in these photographs.

“Your portraits change as you go along because you find out more about your subject,” she says, insisting that she has never been more impressed. 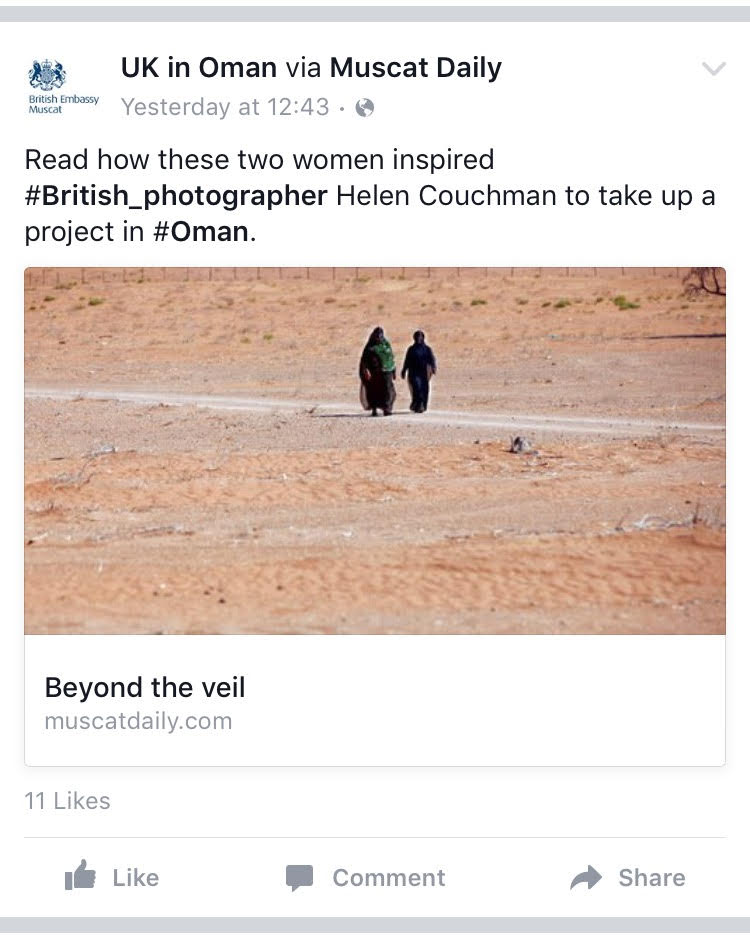