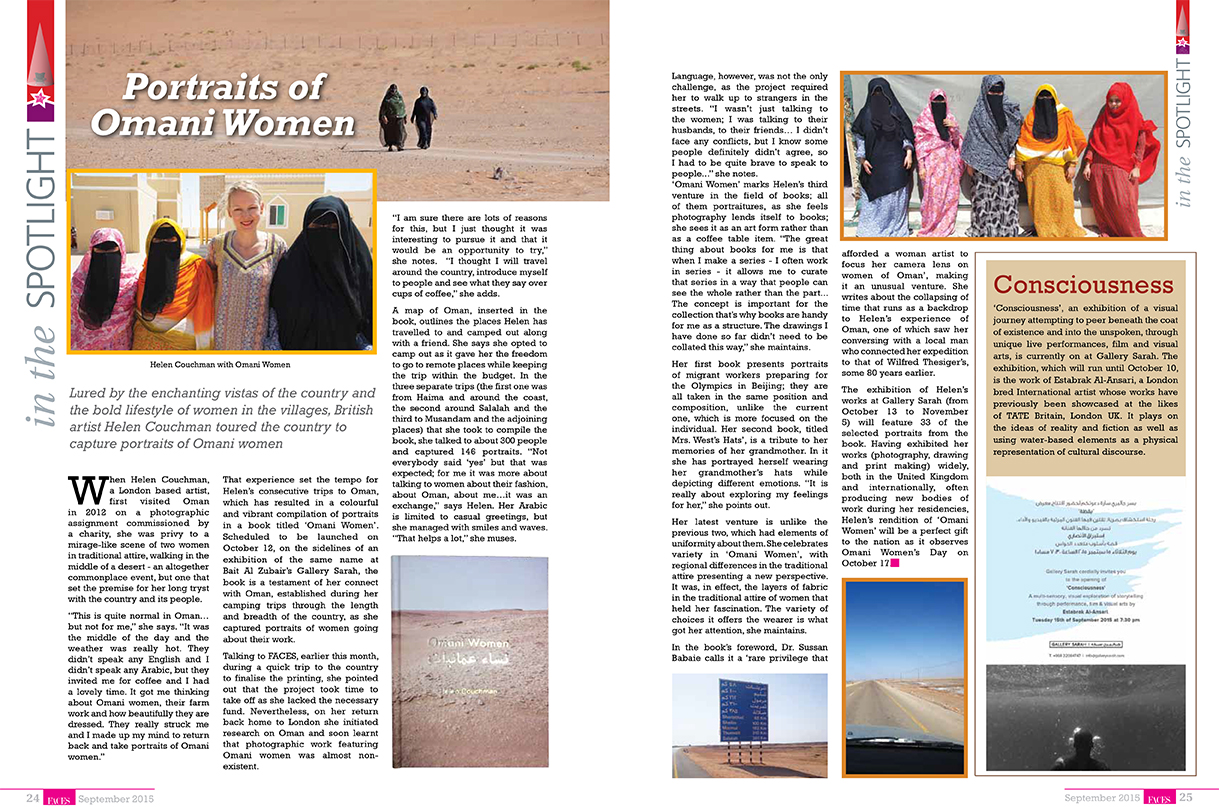 Lured by the enchanting vistas of the country and the quaint lifestyle of women in the villages, British artist Helen Couchman toured the country to capture portraits of Omani women

When Helen Couchman, a London based artist, first visited Oman in 2012 and toured the country on a photographic assignment commissioned by a charity, she was privy to a mirage-like scene of two women in traditional attire, walking in the middle of a desert – an altogether commonplace event, but one that set the premise for her long tryst with the country and its people.

“This is quite normal in Oman…but not for me,” she says. “It was the middle of the day and the weather was really hot. They didn’t speak any English and I didn’t speak any Arabic, but they invited me for coffee and I had a lovely time. It got me thinking about Omani women, their farm work and how beautifully they are dressed. They really struck me and I made up my mind to return back and take portraits of Omani women.”

That experience set the tempo for Helen’s consecutive trips to Oman, which has resulted in a colourful and vibrant compilation of portraits in a book titled ‘Omani Women’. Scheduled to be launched on October 15, on the sidelines of an exhibition of the same name at Bait Al Zubair’s Gallery Sarah, the book is a testament of her connect with Oman, established during her camping trips through the length and breadth of the country, as she captured portraits of women going about their work.

Talking to FACES, earlier this month, during a quick trip to the country to finalise the printing, she pointed out that the project took time to take off as she lacked the necessary fund. Nevertheless, on her return back home to London she initiated research on Oman and soon learnt that photographic work featuring Omani women was almost non-existent.
“I am sure there are lots of reasons for this, but I just thought it was interesting to pursue it and that it would be an opportunity to try,” she notes.  “I thought I will travel around the country, introduce myself to people and see what they say over cups of coffee,” she adds.

A map of Oman, inserted in the book, outlines the places Helen has travelled to and camped out along with a friend. She says she opted to camp out as it gave her the freedom to go to remote places while keeping the trip within the budget. In the three separate trips (the first one was from Haima and around the coast, the second around Salalah and the third to Musandam and the adjoining places) that she took to compile the book, she talked to about 300 people and captured 146 portraits. “Not everybody said ‘yes’ but that was expected; for me it was more about talking to women about their fashion, about Oman, about me…it was an exchange,” says Helen. Her Arabic is limited to casual greetings, but she managed with smiles and waves. “That helps a lot,” she muses.

Language, however, was not the only challenge, as the project required her to walk up to strangers in the streets. “I wasn’t just talking to the women; I was talking to their husbands, to their friends… I didn’t face any conflicts, but I know some people definitely didn’t agree, so I had to be quite brave to speak to people…” she notes.

‘Omani Women’ marks Helen’s third venture in the field of books; all of them portraitures, as she feels photography lends itself to books; she sees it as an art form rather than as a coffee table item. “The great thing about books for me is that when I make a series – I often work in series – it allows me to curate that series in a way that people can see the whole rather than the part… The concept is important for the collection that’s why books are handy for me as a structure. The drawings I have done so far didn’t need to be collated this way,” she maintains.

Her first book presents portraits of migrant workers preparing for the Olympics in Beijing; they are all taken in the same position and composition, unlike the current one, which is more focused on the individual. Her second book, titled Mrs. West’s Hats’, is a tribute to her memories of her grandmother. In it she has portrayed herself wearing her grandmother’s hats while depicting different emotions. “It is really about exploring my feelings for her,” she points out.
Her latest venture is unlike the previous two, which had elements of uniformity about them. She celebrates variety in ‘Omani Women’, with regional differences in the traditional attire presenting a new perspective. It was, in effect, the layers of fabric in the traditional attire of women that held her fascination. The variety of choices it offers the wearer is what got her attention, she maintains.

In the book’s foreword, Sussan Babaie calls it a ‘rare privilege that afforded a woman artist to focus her camera lens on women of Oman’, making it an unusual venture. She writes about the collapsing of time that runs as a backdrop to Helen’s experience of Oman, one of which saw her conversing with a local man who connected her expedition to that of Wilfred Thesiger.

The exhibition of Helen’s works at Gallery Sarah (from October 15 to November 7) will feature 33 of the selected portraits from the book. Having exhibited her works (photography, drawing and print making) widely, both in the United Kingdom and internationally, often producing new bodies of work during her residencies, Helen’s rendition of ‘Omani Women’ will be a perfect gift to the nation as it observes Omani Women’s Day on October 17.