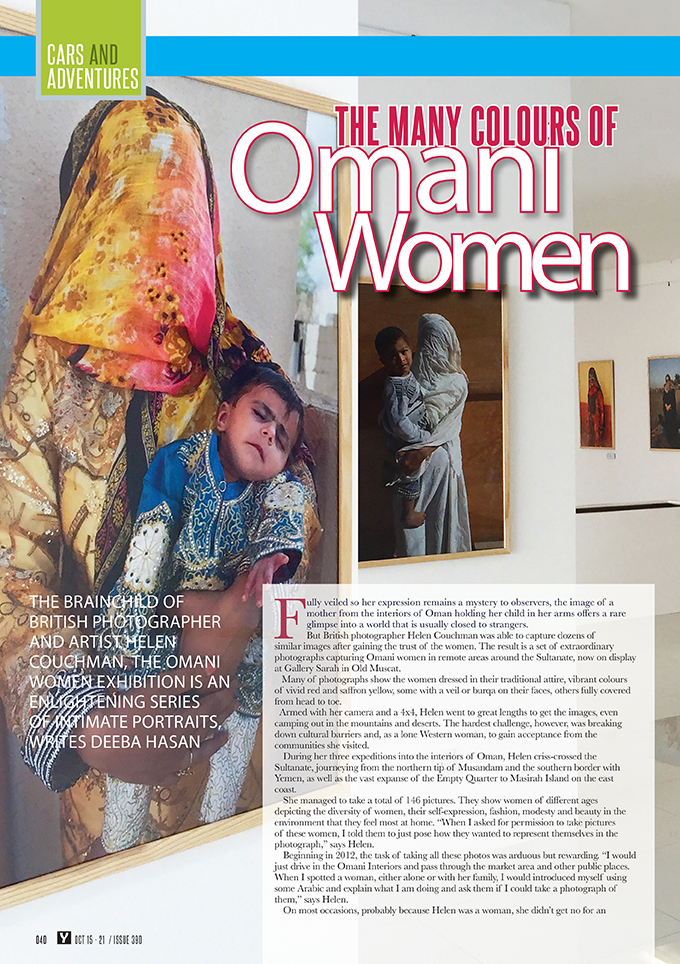 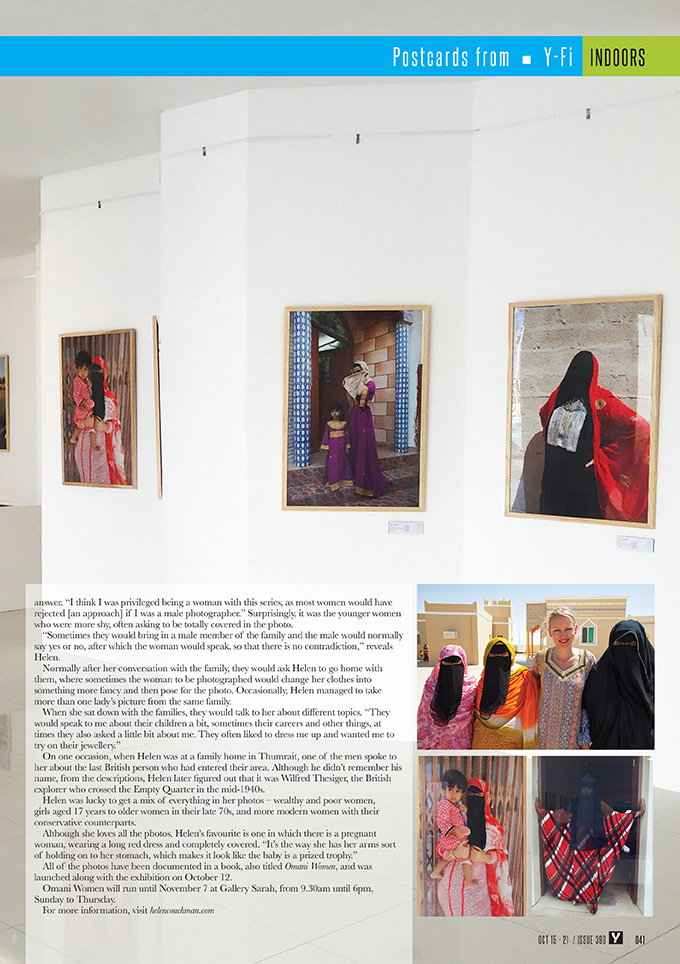 THE BRAINCHILD OF BRITISH PHOTOGRAPHER AND ARTIST, HELEN COUCHMAN, THE OMANI WOMEN EXHIBITION IS AN ENLIGHTENING SERIES OF INTIMATE PORTRAITS, WRITES DEEBA HASAN

Fully veiled so her expression remains a mystery to observers, the image of a mother from the interiors of Oman holding her child in her arms offers a rare glimpse into a world that is usually closed to strangers.

But British photographer Helen Couchman was able to capture dozens of similar images after gaining the trust of the women. The result is a set of extraordinary photographs capturing Omani women in remote areas around the Sultanate, now on display at Gallery Sarah in Old Muscat. 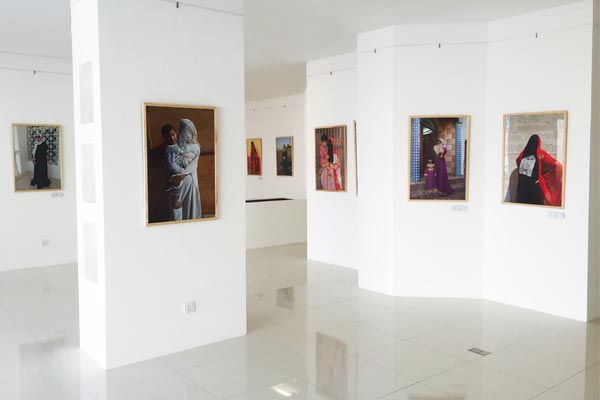 Many of photographs show the women dressed in their traditional attire, vibrant colours of vivid red and saffron yellow, some with a veil or burqa on their faces, others fully covered from head to toe.

Armed with her camera and a 4×4, Helen went to great lengths to get the images, even camping out in the mountains and deserts. The hardest challenge, however, was breaking down cultural barriers and, as a lone Western woman, to gain acceptance from the communities she visited.

During her three expeditions into the interiors of Oman, Helen criss-crossed the Sultanate, journeying from the northern tip of Musandam and the southern border with Yemen, as well as the vast expanse of the Empty Quarter to Masirah Island on the east coast.

She managed to take a total of 146 pictures. They show women of different ages depicting the diversity of women, their self-expression, fashion, modesty and beauty in the environment that they feel most at home. “When I asked for permission to take pictures of these women, I told them to just pose how they wanted to represent themselves in the photograph,” says Helen. 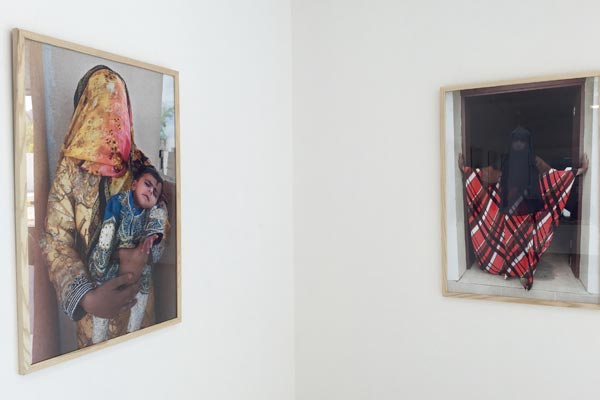 Beginning in 2012, the task of taking all these photos was arduous but rewarding. “I would just drive in the Omani Interiors and pass through the market area and other public places. When I spotted a woman, either alone or with her family, I would introduced myself using some Arabic and explain what I am doing and ask them if I could take a photograph of them,” says Helen.

On most occasions, probably because Helen was a woman, she didn’t get no for an answer. “I think I was privileged being a woman with this series, as most women would have rejected [an approach] if I was a male photographer.” Surprisingly, it was the younger women who were more shy, often asking to be totally covered in the photo.

“Sometimes they would bring in a male member of the family and the male would normally say yes or no, after which the woman would speak, so that there is no contradiction,” reveals Helen.

Normally after her conversation with the family, they would ask Helen to go home with them, where sometimes the woman to be photographed would change her clothes into something more fancy and then pose for the photo. Occasionally, Helen managed to take more than one lady’s picture from the same family.

When she sat down with the families, they would talk to her about different topics. “They would speak to me about their children a bit, sometimes their careers and other things, at times they also asked a little bit about me. They often liked to dress me up and wanted me to try on their jewellery.”

On one occasion, when Helen was at a family home in Thumrait, one of the men spoke to her about the last British person who had entered their area. Although he didn’t remember his name, from the descriptions, Helen later figured out that it was Wilfred Thesiger, the British explorer who crossed the Empty Quarter in the mid-1940s. 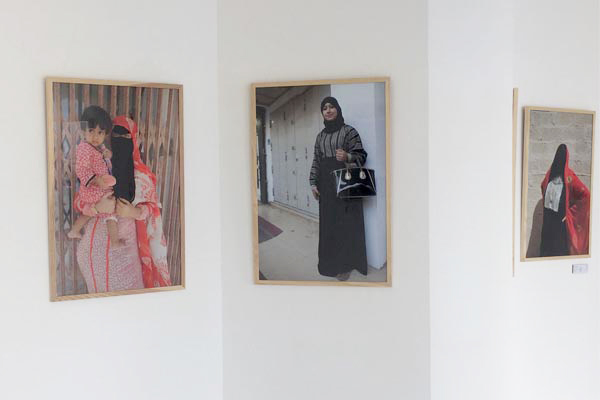 Helen was lucky to get a mix of everything in her photos – wealthy and poor women, girls aged 17 years to older women in their late 70s, and more modern women with their conservative counterparts.

Although she loves all the photos, Helen’s favourite is one in which there is a pregnant woman, wearing a long red dress and completely covered. “It’s the way she has her arms sort of holding on to her stomach, which makes it look like the baby is a prized trophy.”

All of the photos have been documented in a book, also titled Omani Women, and was launched along with the exhibition on October 12.

Omani Women will run until November 7 at Gallery Sarah, from 9.30am until 6pm, Sunday to Thursday.